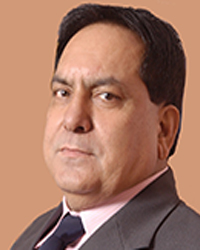 R.K. Shridhar is a well known Astrologers in Delhi, Born and brought up in a prosperous upper middle class Brahman family. By the time he graduated from Delhi University, he realized that destiny had programmed something else for him. Cosmic consciousness started pouring in his mind and spiritual energy molded his interest into the divine science called Astrology to unveil the celestial manifesto pertaining to wisdom, good health, well-balanced financial position, excellent love-life, satisfying career, rewarding business, creative education, meaningful conjugal life, domestic virtue, mitigation of grief and increased mental power of every single person.

After attaining Jyotishacharya from Bhartiya Vidya Bhawan and JyotishVisharad from Indian Council of Astrological Sciences (ICAS) with flying colors, he started exploring this ancient science of sages blending with all modern astronomical findings of time and space. He further, studied Astrology in Lal Bahadur Shastri Sanskrit Vidyapeeth, Delhi (a deemed University).

Teaching different subjects of astrology is his passion that’s why he has been teaching Astrology to the students of ICAS, JJ School of Astrology and other centers of repute for the last 22 years. His thousands of students are his greatest strength and true testimonials. Some find him brilliant mathematician, some as authority on PrashnaShastra (Horary Astrology), others find him as ultimate in providing advance unique predictive techniques.

He edited the magazine “Vedic JyotishRas” in the capacity of Associate Editor for about 4 yrs. He has published hundreds of articles on different aspects of Astrological phenomena in reputed magazines and journals. His original research findings, derived out of long teaching interaction with research scholars of advance research classes of ICAS, are regularly published in Souvenir/Magazine of ICAS. He has been regularly appearing on various TV channels for talk show. Currently, he is the Editor-in-Chief of ‘’JeevanJyotish’’ newsletter on Astrology and other mystic sciences. He is the author of a book ‘’Rashiphal 2015, Rashiphal 2016 and Rashiphal 2017 in Hindi.

For his excellence in deciphering the doctrine of Stars envisaged by ancient mystics, he was honored with “JyotishKovid”, “JyotishVachaspati”, “JyotishMartand” by various esteemed Astrological platforms.

He has millions of fans who love his upbeat and positive style of astrology. His web page is frequently visited by countless people to get a glimpse into what the Future holds for them.