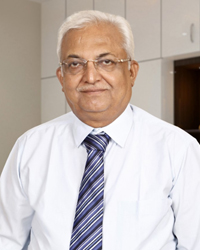 Jyotishachrya and Vastu Martand Surendra Kapoor aged 67 years is a leading light in the field of Vedic Jyotish, Vastu Shastra, Karmakanda, Aura Reading, Naming Names, and Dream Interpretation.  He is a voracious reader, multi-linguistic, multitalented holistic personality, and an experienced counselor. A post-graduate from the University of Calcutta, he completed his Master of Science in Counseling and Psychotherapy and specialized in Psychological Counseling and Career Counseling. Mr. Kapoor has been appointed visiting faculty for teaching Ancient Building Technology to B. Arch. and M. Arch. Student at the Department of Architecture Jadavpur University Kolkata for the last Six Years.

Being a student of Sanskrit he learned through self-study Vedic Knowledge from the than scholars like Padmashree Dr. K.D. Dvivedi, (Ved Vidya), Acharya Avadh Behari Tripathy(The Gita) and Dr. Rameshwar Prasad Tripathi (Vedic Jyotish and Karmakanda). Even after being well versed in traditional knowledge of Vedic Jyotish and Vastu Shastra his thirst for the latest technical knowhow of various aspects of Remedial Measures of Astrology and Vastu Corrections through Building Biology techniques and Aura Analysis took him to contemporary great masters of Aura and Building Biology like Dr. Thronton Streeter (BiofieldScience) Dr. Jhon Rogerson (Aura Analysis) and Dr. Christoper J Bell of International Institute for Building Biology & Ecology (USA).

A versatile person from the beginning Mr. Kapoor possessed deep interest in the study of Vedic texts and Indian Culture. After post-graduation in the year 1975, he undertook a serious study of various Sanskrit texts and in the year 1980, he chose Applied Vastu, Vedic Jyotish and Remedial Measures as his special subjects and has spent the last about 37 years researching and gaining knowledge about the ancient Indian scriptures and its treasure trove of information on Vedic Jyotish and Vastu Sastra.

He has been included in international Astrologer’s Directory brought out in 2003 as one of the “100 Living Legends in the field of Astrology and Vastu". Recently, he got top branding by Just Dial for high grade quality performance by star of the Millennium Amitabh Bachchan in the year 2013 and in 2015.

"Pracharya" Kapoor was declared “Man of the year” for his contribution to the field of Astrology, at the 23rd International Astrological Conference held in Calcutta during February 1999. In addition distinction of “Millennium Vastu Shastry” was also awarded to Mr. Kapoor at International Vastu Association, Mumbai (2000).

He has been actively associated with many journals and magazines as a columnist and is an active member of the Editorial board of numerous periodicals in the field of Astrology, Vastu, and Indology. He delivers lectures on topics of Indian art and culture and organizes “Audio Visual” shows regularly to disseminate the knowledge and latest information on “Astrology, Vastu, Naming Names, and allied subjects.

His articles have been published in various magazines and newspapers and have presented papers in various National and International conferences. He is an active member of various prestigious institutions and organizations in India and abroad. He is a recipient of numerous awards and notes of appreciations from renowned personalities. He is the author of several bestseller books on Astrology, Naming Names, and Vastu Shastra. At present, he is the Vice-Chairman of The Institution of Vastu Science (India), a National Council of Vastu Consultants.

1. Mr. Kapoor has participated and presented a research paper named ‘45 Devta’ of ‘Vastu Purush Mandal’ in “Bharatiya Vigyan Sammelan and Expo” on 11-14 May 2017, Fergusson College, Pune.

2. He has participated in a panel discussion on “Nataraja a confluence of Arts and Science” on 12th-13th January, 2019 at Inter-University Centre for Astronomy and Astrophysics (IUCAA), Pune.