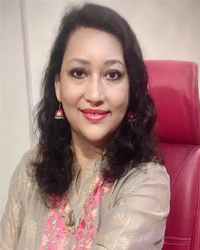 Nandita Pandey is an internationally acclaimed celebrity Astrologer, Tarot Card Reader, Energy Healer, Past Life Regression Therapist, Spiritual Guide and Life Coach. Counted amongst the top few Astrologers & as the highest-rated and credible Tarot Card Reader in India and across the Globe, Nandita has proved her mettle time and again by being uncannily accurate on her forecasts on events of National and International importance.

A spiritually gifted Soul, she is a natural mystic. Her deep knowledge of Metaphysics, Astrology, Tarot and related sciences is also enhanced by her clairvoyance and her Para psychic abilities. In fact, as per the data of the last decade and a half in Indian News Channels, she has to her credit the highest number of predictions made on news channels with the highest rate of accuracy amounting to a rate of 99% accuracy.

Nandita’s international presence has been felt in the famous documentary series “Family Footsteps” produced by Australian Broadcasting Corporation (ABC) where she was one of the main protagonists, mentoring as a Spiritual Guide and Astrologer to a third-generation Australian who had her roots in India. This was later telecasted in Discovery Channel too.

On her visit to New York, USA, she was also interviewed as an esteemed guest in New York based ITV channels popular programme “PRERNA”  a half-hour show to enlighten the viewers in the US of her journey into spirituality and demystifying many myths.

She has been writing columns for “HUM HINDUSTANI” the famous and highly creditable Hindi newsweekly published from New York, USA since 2014.

She also has been the first person to perform LIVE Past Life Regression sessions for an episode of the highly watched programme “Kyon” telecast in November 2007, in STAR NEWS.

Few of her long-running regular TV shows in different channels are as follows:

She writes for a number of lifestyle magazines and weeklies and has a dedicated column on Weekly Tarot in Delhi Times, Navbharat Times for last 12 years. She is also a resident AtroTarotloger since 2006 for the Times of India Group, India’s leading Media Conglomerate.

Nandita is a Science graduate with deep knowledge of Metaphysics which gives her an edge over others on explaining Metaphysics in a scientific manner. This edge has silenced many rationalist and scientists on a number of debates held on various TV News Channels.

Nandita, was challenged by Rationalist Sanal Edmarku (President, Rationalist Society of India) to predict career of 10 horoscopes. In a two-hour LIVE show in INDA TV, Nandita predicted the career of all the 10 people absolutely accurately. The only data that she was provided were a date, time and place of birth of the person.

There are no services available right now. View all astrology services
Advertisement